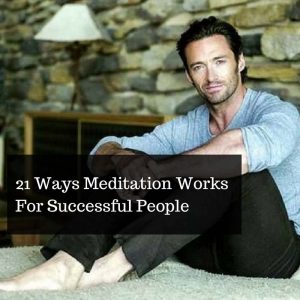 Even before I was an entrepreneur I was into meditation. In fact, it was because of meditation that my entrepreneurial tendency became evident in my life. Before learning to meditate I had a regular 9 to 5 job and all the headaches that went with it.

In my mind I was certain that the best I could hope for was a career that paid well and that gave me some sense of satisfaction. Well, after several career changes, that didn’t look like it was ever going to happen.

Then one day I was lucky enough to come across a meditation course while I was staying in Melbourne. I had no idea what meditation at the time as it all seemed a bit airy fairy to me in my head but I was curious to see what all the fuss was about. It turned out to be one of the best investments I ever made in myself.

It wasn’t long after I had finished my course that I noticed that there were subtle changes happening in my life. The biggest one by far, apart from feeling better about myself than I had in a long time, was that the door to my creative genius had opened wide.

Idea after idea kept popping into my head about things that I could create and do with my life. In no time flat I had quit my job, taken up public speaking, and was developing courses and programs around meditation and mindset. By this stage I was meditating twice a day and the benefits to my health, career, relationships, and quality of life kept on coming.

I share this with you because while it may not be so evident why meditation and success go together perhaps in me sharing my success story it might help to make it a bit clearer. From a scientific perspective meditation changes the grey matter in your brain and creates new neural pathways. That alone indicates that new ways of thinking and behaving would be the very least of benefits you could expect.

To reinforce this message I came across an awesome article on Huffington Post that talks about the many and varied benefits of meditation and thought it would give you even more ideas on how what else meditation has done for others.

Research published just last month in the journal Health Psychology shows that mindfulness is not only associated with feeling less stressed, it’s also linked with decreased levels of the stress hormone cortisol.

2. It makes your brain plastic

Quite literally, sustained meditation leads to something called neuroplasticity, which is defined as the brain’s ability to change, structurally and functionally, on the basis of environmental input. For much of the last century, scientists believed that the brain essentially stopped changing after adulthood.

But research by University of Wisconsin neuroscientist Richard Davidson has shown that experienced meditators exhibit high levels of gamma wave activity and display an ability — continuing after the meditation session has attended — to not get stuck on a particular stimulus. That is, they’re automatically able to control their thoughts and reactiveness.

3. It lets us get to know our true selves

4. It can make your grades better

Researchers from the University of California, Santa Barbara, found that college students who were trained in mindfulness performed better on the verbal reasoning section of the GRE, and also experienced improvements in their working memory.

“Our results suggest that cultivating mindfulness is an effective and efficient technique for improving cognitive function, with wide-reaching consequences,” the researchers wrote in the Psychological Science study.

5. It improves performance and ability

The U.S. Marine Corps is in the process of seeing how mindfulness meditation training can improve troops’ performance and ability to handle — and recover from — stress.

6. It could help people with arthritis better handle stress

A 2011 study in the journal Annals of Rheumatic Disease shows that even though mindfulness training may not help to lessen pain for people with rheumatoid arthritis, it could help to lower their stress and fatigue.

7. It changes the brain in a protective way

University of Oregon researchers found that integrative body-mind training — which is a meditation technique — can actually result in brain changes that may be protective against mental illness. The meditation practice was linked with increased signaling connections in the brain, something called axonal density, as well as increased protective tissue (myelin) around the axons in the anterior cingulate brain region.

8. It works as the brain’s “volume knob”

Ever wondered why mindfulness meditation can make you feel more focused and zen? It’s because it helps the brain to have better control over processing pain and emotions, specifically through the control of cortical alpha rhythms (which play a role in what senses our minds are attentive to), according to a study in the journal Frontiers in Human Neuroscience.

Mindfulness meditation improves our focused engagement in music, helping us to truly enjoy and experience what we’re listening to, according to a study in the journal Psychology of Music.

10. It has four elements that help us in different ways

The health benefits of mindfulness can be boiled down to four elements, according to a Perspectives on Psychological Science study: body awareness, self-awareness, regulation of emotion and regulation of attention.

11. It helps us even when we’re not actively practicing it

You don’t have to actually be meditating for it to still benefit your brain’s emotional processing. That’s the finding of a study in the journal Frontiers in Human Neuroscience, which shows that the amygdala brain region’s response to emotional stimuli is changed by meditation, and this effect occurs even when a person isn’t actively meditating.

12. It could make going through cancer just a little less stressful

Research from the Jefferson-Myrna Brind Center of Integrative Medicine shows that mindfulness coupled with art therapy can successfully decrease stress symptoms among women with breast cancer. And not only that, but imaging tests show that it is actually linked with brain changes related to stress, emotions and reward.

13. It could help doctors be better at his/her job

Doctors, listen up: Mindfulness meditation could help you better care for your patients. Research from the University of Rochester Medical Center shows that doctors who are trained in mindfulness meditation are less judgmental, more self-aware and better listeners when it comes to interacting with patients.

14. It makes you a better person

Sure, we love all the things meditation does for us. But it could also benefit people we interact with, by making us more compassionate, according to a study in the journal Psychological Science. Researchers from Northeastern and Harvard universities found that meditation is linked with more virtuous, “do-good” behavior.

15. It could help the elderly feel less lonely

Loneliness among seniors can be dangerous, in that it’s known to raise risks for a number of health conditions. But researchers from the University of California, Los Angeles, found that mindfulness meditation helped to decrease these feelings of loneliness among the elderly, and boost their health by reducing the expression of genes linked with inflammation.

As many as one in five pregnant women will experience depression, but those who are at especially high risk for depression may benefit from some mindfulness yoga.

“Research on the impact of mindfulness yoga on pregnant women is limited but encouraging,” study researcher Dr. Maria Muzik, M.D., an assistant professor of psychiatry at the University of Michigan, said in a statement. “This study builds the foundation for further research on how yoga may lead to an empowered and positive feeling toward pregnancy.”

17. It could make your health care bill a little lower

Not only will your health benefit from mindfulness meditation training, but your wallet might, too. Research in the American Journal of Health Promotion shows that practicing Transcendental Meditation is linked with lower yearly doctor costs, compared with people who don’t practice the meditation technique.

18. It comes in handy during cold season

Aside from practicing good hygiene, mindfulness meditation and exercise could lessen the nasty effects of colds. Researchers from the University of Wisconsin School of Medicine and Health found that people who engage in the practices miss fewer days of work from acute respiratory infections, and also experience a shortened duration and severity of symptoms.

Teaching teens how to practice mindfulness through school programs could help them experience less stress, anxiety and depression, according to a study from the University of Leuven.

20. It helps you sleep better

We saved the best for last! A University of Utah study found that mindfulness training can not only help us better control our emotions and moods, but it can also help us sleep better at night.

“People who reported higher levels of mindfulness described better control over their emotions and behaviors during the day. In addition, higher mindfulness was associated with lower activation at bedtime, which could have benefits for sleep quality and future ability to manage stress,” study researcher Holly Rau said in a statement.

PS: If You Want To Learn To Meditation Made Simple For Free – Click Here For Instant Access

Change Your Life With 5 Minute Meditations

Get Access to Your 7-Day Meditation Mastery Challenge Here